The recent imbroglio over world number one tennis player, Novak Djokovic’s contested visa and medical exemption has, at the very least, contributed to much greater awareness in Australia and around the world about the incarceration of 33 innocent refugees in the Park Hotel, Melbourne now quickly heading for their 9th year.

For many Australians, it’s perhaps the first time they are confronted with what we have done to these innocent people. Although every Australian must be aware of the horrific prison islands of Manus and Nauru, you may not realise that hundreds of refugees were so badly damaged after years of misery that they had to be transferred to Australia for medical treatment over the past few years.

This treatment has been denied, their mental and physical health is destroyed with many just getting through the days with painkillers to numb the monotony and despair, their conditions are disgusting as Djokovic’s detention demonstrated, they haven’t seen their families for almost a decade, even though every single one of them is a refugee.

That means that under international law, they have fled persecution of a variety of specified forms and are recognised as the most vulnerable people imaginable, ones who have called on Australia for assistance.

Let their shocking wellbeing not detract from their normality, they’re just like you and I and are, in fact, extremely strong to have held on to life this long. I am not sure how many of us could have done so.

Our system of mistreatment has resulted in the deaths of many, the destruction of countless other lives and levels of self harm that are catastrophic.

In 2019, I went to Port Moresby to see for myself and found scores of people with cuts to their arms, medicated out of their minds and addicted to prescription painkillers just to dull the torment, people with severe medical issues crying out for treatment where there was none.

Our mistreatment of these innocents will not be easily wiped away by history, rather it will become a lasting part of our immigration story which too often is about politicians grasping short term political gain at the expense of communities, individuals or cohorts like refugees.

I see them all as important barometers of the character of Australian society and until they are freed and atonement made, we are wallowing in an abyss of inhumanity that should never be associated with us as a country, or people.

They also represent one part of a broader addiction to imprisonment and detention that we need to interrogate, whether locking the Biloela children up while they undertake legal appeal to which they’re perfectly entitled, whistleblowers like Witness K, Indigenous kids as young as 10 or indeed our collective silence about the ailing Julian Assange, who is likewise incarcerated cruelly, disproportionately and improperly, it’s all part of the same phenomenon.

Whatever your views on immigration and even seeking asylum, and there is truckloads of materials available about how it is a basic right and that Australia as a signatory to the Refugee Convention 1951 has a basic obligation to them, we should all agree on one simple fact: Australia should not torture people.

Nine years without hope, without being allowed to study, see family, often even for long periods to smell fresh air is an abominable way to treat anyone, let alone the most vulnerable people in the world who are escaping persecution and death.

Irrespective of your views on immigration or the border politics that intermittently harms many, let us simply agree that incarcerating any innocent person for 9 years, treating them worse than animals and breaking their spirit and body is not acceptable.

If we can agree on this basic and obvious reality, we can join together to help get them out.

The only way is through intense, and immense political pressure.

The Australian Government are embarrassed, one one hand since current Prime Minister, Scott Morrison made his career through demonising these people and stating that they’d never come to Australia (as did many previous PM’s), and additionally having spent decades fear-mongering about who these people were not, lying about them and their intentions, it’s difficult for the Government to walk all the untruths back and simply admit two realities:

1. That they are innocent refugees, same as you and I except far more vulnerable and in need of our support; and

2. There is absolutely no reason other than for political gain to keep them locked up. There are over a thousand of the same cohort of refugees already in community, and no one could care less. This last group have the greater misfortune of being the last political pawns, being moved around the board until such time as there is no further political capital to be gained from the political game.

Our responsibility as Australians is to do 2 things:

a. Call for their immediate release and do everything possible to bring that to reality; and

b. See through the constant rhetoric on borders for what it is, prosecute this part of the National psyche that has allowed us to torture these people and see them as somehow unworthy enough to literally rot away in front of our eyes, even die. It’s long past time that we took a sane approach to immigration which will necessitate the whole country refusing to be constantly triggered by the fear of people coming to Australia. This pattern has existed since Federation and needs to stop.

They have suffered endlessly, and must be freed.

Then, and only then, can we all have a reasonable conversation about borders and immigration. That necessary discussion can’t be allowed to elongate their imprisonment any longer.

The first step is to let them out.

Then we can look at what we did, why, who triggered and profited from it, where $12 billion has gone, and what we will change in future.

I wrote a short commentary on the Djokovic situation and what it says about our addiction to detention, often endless, below. 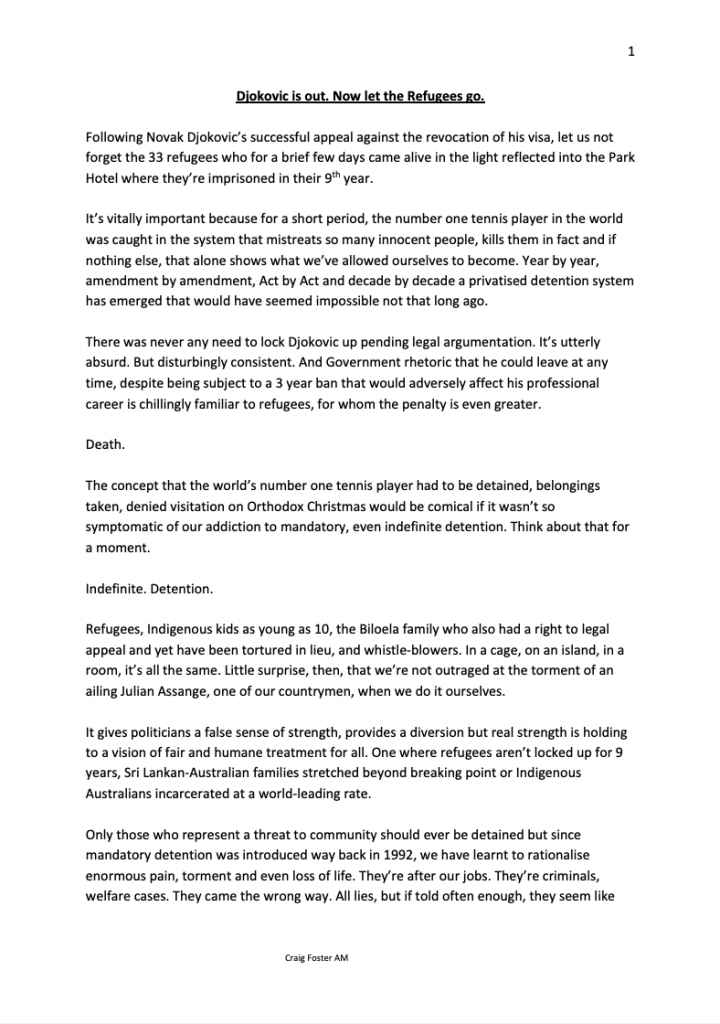 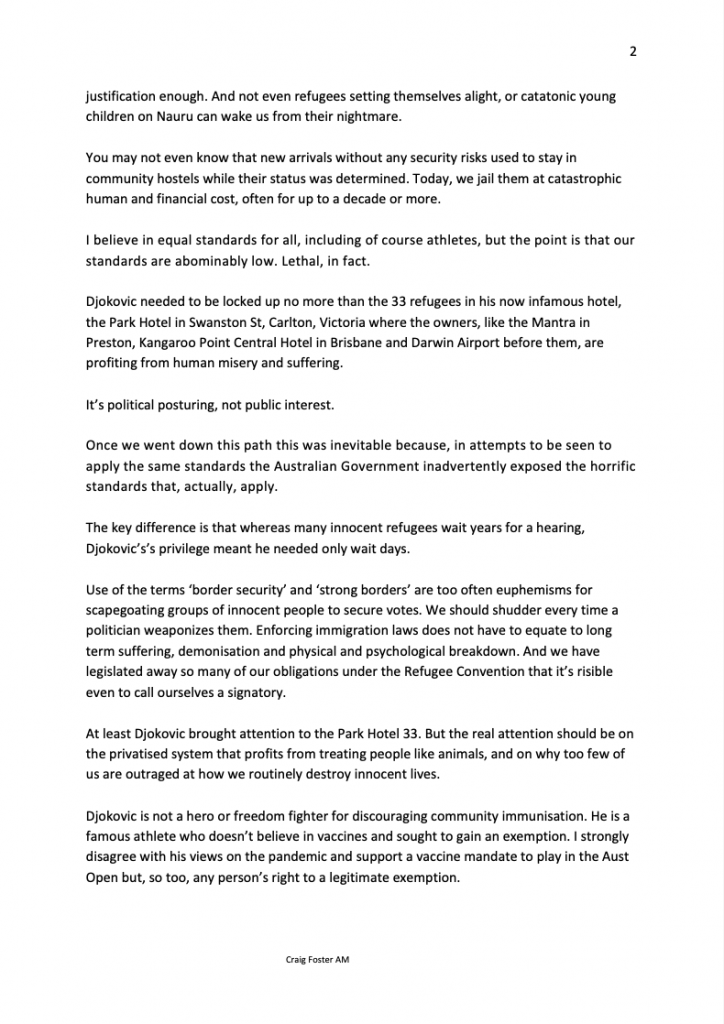 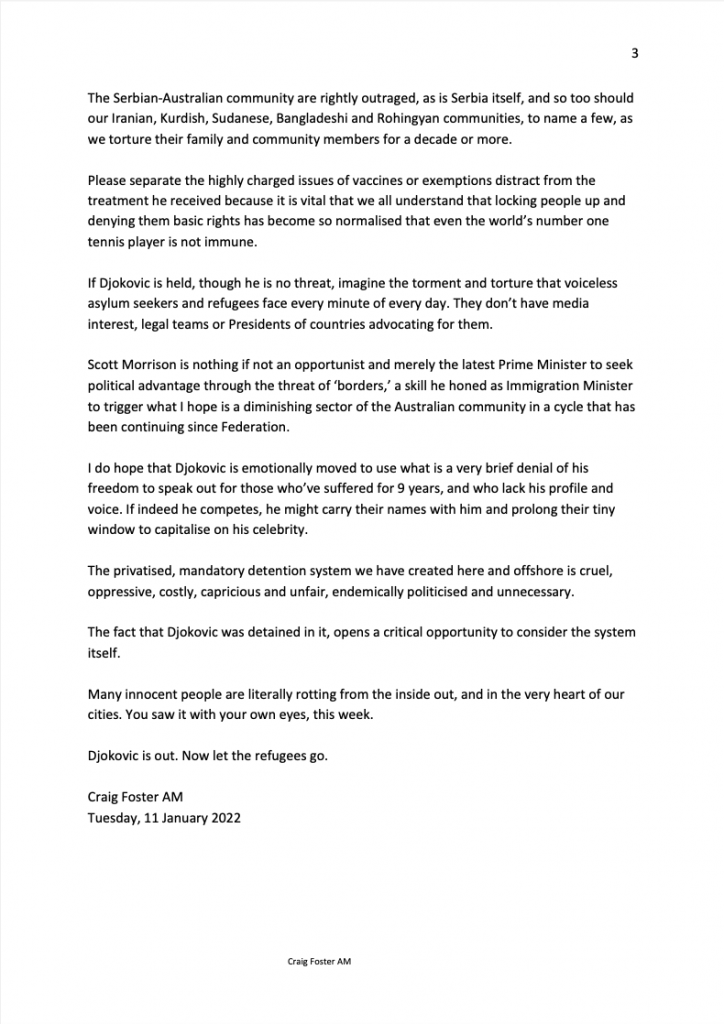 And for those who want to act, there are 3 ways.

1. Protest – If you’re in Melbourne, go and protest at the Park Hotel. Speak up, act, don’t be silent and compliant. The refugees need every voice. When we are numerous and loud enough, they will be freed.

2. Following Djokovic, and irrespective of whether his exemption was legitimate or otherwise and whether he plays or not, the world has seen this atrocity through the prism of the Australian Open and, if you are going, take a banner, shirt, photo, statement or use your social media to post your photo

3. Engage politically – I have written and shared two suggested, generic letters which are included below. Rewrite them with your details or simply download and send, as is. Let the Prime Minister and your Local MP know that you do not wish to be associated with this horrific situation, that you are aggrieved about your tax dollars funding human suffering and that you expect it to end immediately.

Scott Morrison’s email link is here where you can upload your correspondence:

A link to the relevant email address for your Local MP is here:

On this website, you will also find plenty of information about #GameOver which is a campaign to raise awareness about the refugees here and offshore and call for their freedom, including an offer by New Zealand for the past 7 years to resettle 150 for year which has, cruelly, been denied by successive Australian Governments.

Please find below the suggested letters and thankyou for your interest and action.

It’s the least we can do for the refugees and their poor families in despair.